COMING 2022
A huge American pick-up is as likely to turn up in a cars-to-save-the-earth list as a Trump supporter at Greta’s next group hug. But the R1T Explore should. An EV truck created by super-cool US start-up Rivian, it boasts two e-motors on each axle for all-wheel drive, 400 miles-plus of guilt-free motoring and get this – more horsepower than a Ferrari F8 supercar. And Rivian says there’s more lockable storage than any other pick-up. Niche claim lads, but bloody useful. Sounds like some far-out concept, but Rivian promises the R1T can be yours from 2021 in the US, likely 2022 in the UK. If you’re craving something similar to lease right now, well, Tesla’s also cooking up its Cybertruck, but you’re so far ahead of that curve it’s not even built yet. So why not check out an eco-friendly SUV, like the Tesla Model X or Audi e-tron? Then give us a call on 020 8012 8190 and we’ll line you up a mega lease in the UK for an awesome price. 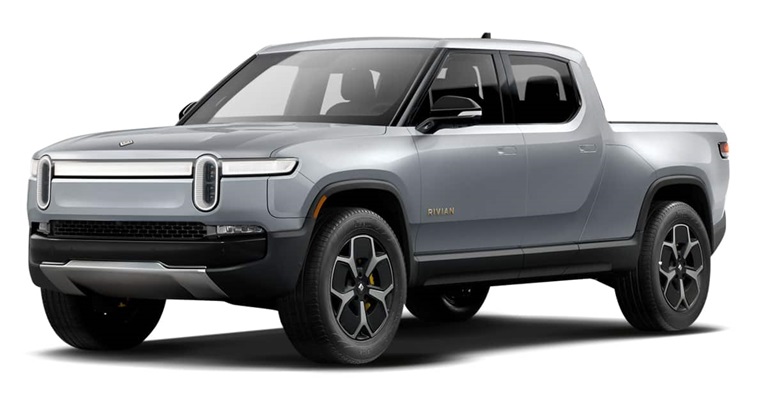 The ravishing features of the Rivian R1T
Rivian is pulling no punches with the ludicrously cool R1T. With over-the-air updates, stupidly smart storage solutions, on-board computers, and a luscious touchscreen interface, this is an EV worth drooling over. For more specifics on features and lease pre-prices, simply request a quote or give us a call: 020 8012 8190.

Hang on a quick spec This futuristic pick-up truck has specs that leave the combustion crones in the dust. The base model alone can manage upward of 250 miles on a single charge. Wowee says WeVee.
Design

See, you can have brains and beauty. EV innovation didn’t just stop at performance and tech. Admire the view through a panoramic sunroof. Marvel at boot space. Or swoon at the aerodynamic sculpting.
Safety

The Rivian R1T isn’t just wicked fast, it’s wicked safe too. Jam-packed with safety features, it's stupidly simple to drive and park. And most importantly, they make it kinda difficult to crash too.
Technology

The Rivian R1T is so much more than top-line specs. Just because it’s electric doesn’t mean compromising on performance or cool innovative tech. Check these little beauties out.

Save the world and your wallet
Aside from cleaning up the air and giving you an incredible driving performance, EVs also save you loads a month. Drop us a note or call us on 020 8012 8190 and see how much driving the Rivian R1T Explore will save you. We’ll calculate all your savings and configure a bespoke lease price – without any pressure or salesy business.

Drive your motoring costs in half

The Government want you to drive electric as much as we do. Which is why they’re encouraging businesses and their employees to switch to an electric vehicle by offering a tax-efficient way to pay for an EV lease through your business: Salary Sacrifice.

Not only do you save on VAT, but on income tax and National Insurance as well – plus, it’s HMRC compliant too. Salary Sacrifice is literally designed to help you, your business and your employees save money and drive an exceptional car at the same time.

Spend 75% less on fuel
Forget big bills at the petrol station. The only cost of filling up your electric vehicle is the electricity you use to charge your EV battery. Costing an average of £0.03 a mile, you can save up to 75% in fuel costs alone, every month. Bet your combustion SUV doesn’t give you a full tank and change from a tenner.

So, it's like free money?
Too good to be true? Nope. The Government want you to drive an electric vehicle as much as we do. They’re lopping off up to £2,500 of the OTR price of every new electric car (that costs up to £35,000), which lowers the lease price. Oh. And they'll even give you a grant for installing a home-charger too.

No ULEZ or Congestion Charge
Driving through London and other city centres is getting expensive. But not if you switch to an electric vehicle. Forget paying the £12.50 ULEZ fee (expanding to the North and South Circular from October 2021) and the £15 Congestion Charge. If you drive electric, it’s free. Lovely.

Soooo, now what?
We’re here to make switching to electric simple and fun. Let’s chat about how awesome the Rivian R1T Explore is (and all our other cars while we’re at it) and we can calculate your exact savings as well as come up with a personalised lease price. Go on, give us a bell on 020 8012 8190 and we'll sort you out.
Explore

Some similar cars to this bad boy

Here are some similar EVs that might tickle your fancy too, or just continue to have a browse of all the electric cars and vans.